SC)--The Kingfisher County Sheriff's Office is investigating a Saturday shooting that left one man dead and is tied to a rollover crash on U.S. 81 that injured three people, one critically. About 9:40 Saturday night, Kingfisher 911 received a call of shots fired at a location northwest of Hennessey. Kingfisher County Sheriff Dennis Banther told Enid News and Eagle, another two calls were received reporting a rollover on U.S. 81 north of Hennessey and a suspicious person walking at a location northwest of Hennessey. It was determined the two incidents were related, Banther said. The victim of the shooting, Christopher Robinson, later succumbed to his injuries and was pronounced dead at an Enid hospital. Two of those injured in the accident were transported to an Enid hospital, and one was flown to OU Medical Center in Oklahoma City. The rollover happened 2 miles north of Hennessey on U.S. 81, according to Oklahoma Highway Patrol. 26 year-old Michael Porter of Guthrie, was a passenger in a 2015 Toyota Tundra that was driven by 31 year-old Benjamin Mills of Waukomis. The vehicle was southbound on U.S. 81 when for an unknown reason it left the roadway and struck a utility pole. The truck rolled an undetermined amount of times and came to rest in a field. Porter was transported from the scene by helicopter to OU Medical Center, where he was admitted in critical condition with a head injury. Mills was uninjured. His other two passengers: 27 year-old Bonnie Mills of Waukomis and 4-year-old, whose name was withheld from the report, were taken to Integris Bass Baptist Health Center in Enid and treated and released. Benjamin Mills' condition at the time of the crash and the cause of the collision both remain under investigation, according to the OHP report. "Deputies were able to secure each scene and are actively working the shooting incident," Banther said. The Oklahoma Highway Patrol is investigating the crash.  No arrests have been made at this time.

TF)—An Enid woman who was struck and killed by a train Saturday east of Enid has been identified. Enid Police received a call at just after 2:40 Saturday afternoon reporting an accident between a train and a pedestrian at the railroad tracks just east of 42nd Street on U.S. 412. The train conductor told police they spotted a woman, 33 year-old Ashley Surrett, walking along the bridge just to the north of the highway, and gave warning before striking Surrett who was pronounced dead at the scene by Life EMS.

CV)--Two more virus-related deaths and 24 more confirmed coronavirus cases were reported in Oklahoma since Sunday, according to daily numbers released late this morning by the Oklahoma State Department of Health. A total of 4,613 Oklahomans have tested positive for COVID-19 and a total of 274 virus-related deaths have been reported. One of the deaths occurred in the past 24 hours and the other person died on May 9. The number of confirmed cases in Garfield County remains at 22 (20 in Enid) in today’s report. There has been one death in Garfield County, an 86 year-old woman in early April. In the latest report Kingfisher County remains at eight confirmed cases, Major County is at five cases with one death, Grant County has two confirmed cases, and Alfalfa County has reported one.

FC)—An Oklahoma City man was killed in a two-vehicle crash in Kingfisher County early Sunday. Oklahoma Highway Patrol officials said 34 year-old Kevin Cornelius Branch was transported by Air-Evac to OU Medical Center where he was pronounced dead from massive injuries. According to the report Branch was westbound on State Highway 33 approximately 12 miles west of Kingfisher at 6:20 Sunday morning when his 2010 Ford Focus failed to negotiate a curve, crossed the centerline and hit an eastbound 2020 Peterbilt semi on the driver’s side. The driver of the semi, 32 year-old Mikel Dane Bateson was transported to Mercy Hospital in Kingfisher where he was treated and released. The crash remains under investigation.

DA)--An Enid man was injured in a motorcycle crash south of Crescent on Friday. OHP officials said 35 year old Evan Downey was driving a 2016 Ducati northbound on State Highway 74, six miles south of Crescent just before 6:00 p.m. Friday. According to the report, Downey was driving recklessly, popped a wheelie, and lost control falling backwards. Downey was transported to Saint Anthony’s in Oklahoma City, where he was admitted in good condition with leg injuries. He was wearing a helmet at the time of the accident.

GD)--A Guthrie man was critically injured Saturday night in a one-vehicle crash north of Hennessey. Oklahoma Highway Patrol officials said 31 year old Benjamin Millis of Waukomis was driving a 2015 Toyota Tundra, southbound on U.S.81 about 2 miles north of Hennessey just after 9:30 Saturday night, when he lost control and struck a utility pole. He was not injured in the accident, but his passengers were. 27 year old Bonnie Millis of Waukomis, was transported to Integris Bass in Enid, with a leg injury. She was treated and released. 26 year old Michael Porter of Guthrie was transported by Air Evac to OU Medical Center, where he was admitted in critical condition with a head injury. The accident remains under investigation.

CS)--Enid Police Department is asking the public for its help in identifying a burglar caught on video surveillance. On April 25, officers responded to the Dugout Dispensary, 1609 W. Chest­nut. Upon arrival officers found a broken glass door to the business. Video surveillance from the store showed a male subject wearing a black VEGA motorcycle helmet, blue jeans, a dark-green, long-sleeve hooded jacket, gloves and shoes with a white stripe on the bottom. Police have released stills from the video asking anyone who can identify the man to contact them. 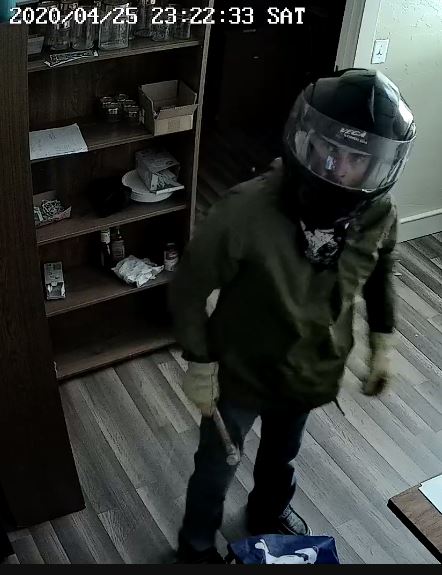 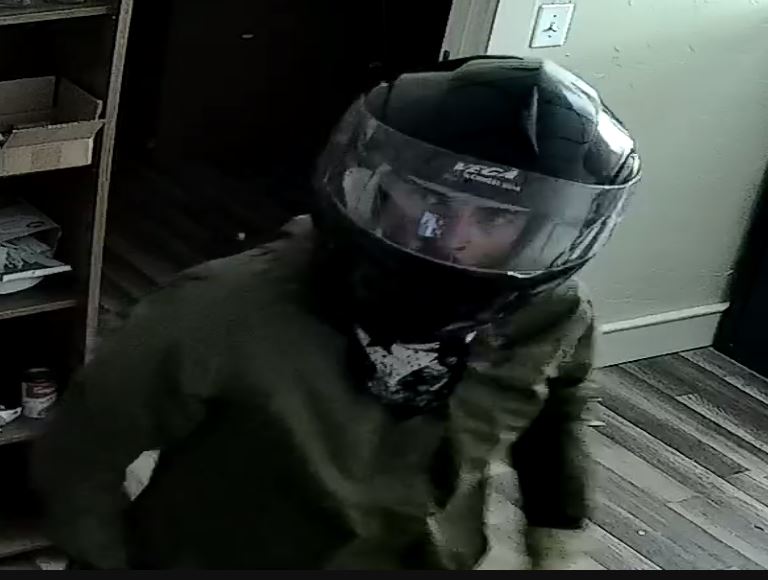 Anyone with information leading to the arrest or prosecution of this or any crime can report an anonymous tip with Garfield County Crime Stoppers at (580) 233-6233, text to 274637, typing “Enid” and a message in the text box or https://www.enid.org/services/police. Those submitting a tip could earn a reward up to $1,000 and will not be required to testify nor be identified.

MJ)--The Legislative Office of Fiscal Transparency Oversight Committee selected Burlington native Mike Jackson, now of Oklahoma City, as executive director. House Speaker Charles McCall and Senate President Pro Tem Greg Treat created the office last year as an independent agency to provide the Legislature and public with details on agency spending. Jackson served in the state House from 2004 to 2014, representing Enid, and most recently served as executive vice president of government and political affairs at the State Chamber of Oklahoma.

BH)—Enid City Commissioners have been told during budget hearings the city has built in a decrease in revenue into its budget plan for the 2020-21 fiscal year. The city has budgeted a 10% decrease in sales tax revenue, nearly $2 million less in water revenue and $405,000 less in police fines, Sales tax revenue for the 2020-21 fiscal year was budgeted at about $32.6 million, a decrease of about $3.6 million from fiscal year 2019-20. Commissioners will have another special budget hearing Thursday to continue to go over budgets for additional individual departments. The overall budget commissioners are expected to approve in their meeting May 19 calls for about $156.5 million in revenue, with spending set at about $163 million. The roughly $6.26 million deficit will be made up by fund balances that have built up over the years in several areas.